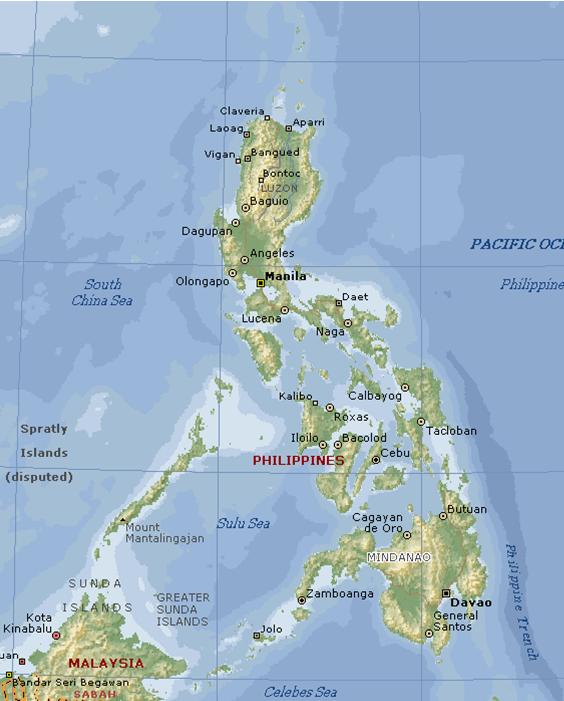 The Philippines, composed of 7,100 islands and islets, is an archipelagic country located in Southeast Asia. Its boundaries are formed by three large bodies of water: on the west and north by the South China Sea; on the east by the Pacific Ocean; and on the south by the Celebes Sea and coastal waters of Borneo. The total land area of the Philippines is 300 thousand square kilometers or 30 million hectares. It constitutes two percent of the total land area of the world and ranks 57th among the 146 countries of the world in terms of physical size. Being archipelagic country fishing is an important source of livelihood for people in the coastal areas.

Focus Group Discussions done by the Center for Empowerment and Resource Development, Inc. (CERD), a non-government organization implementing community-based coastal resource management, shows that an estimated 50-90% of fishing activities are done by women . In addition, women also earn income by utilizing the coastal resources. Mangrove areas, by their nature (nearshore) are usually where women go to gather fish, shellfishes, and other marine resources (such as fry). Mangroves were also used as firewood. Particularly in 1 island 76 women out of 86 households are involved in shell gathering.

Other zones in the coastal areas that women use for their subsistence (food, income, health) are seagrass beds, reef flat areas, and beach areas. There are several women and men that also go into seaweed farming as additional source of income.

The state of fishery and marine resources are declining. In focus group discussions conducted by CERD, fishers are reporting that fish catch declined significantly. This is usually caused by illegal and destructive fishing and intrusion of commercial fishers in municipal waters, resulting to decline in fish stock as well destruction of coral resources and seagrass beds.

Mangrove resources are also destroyed by illegal cutting and conversion into fishponds or beach resorts.

The decline in fish catch of the fishers puts additional burden on the women. In addition to their reproductive work load (household chores, caring for the family) and participation in fishing activity, they have to find additional sources of income. With the mangrove and seagrass resources getting degraded, their sources of income are affected. They seek income from other sources like getting paid doing household work (like laundry) in more affluent families. 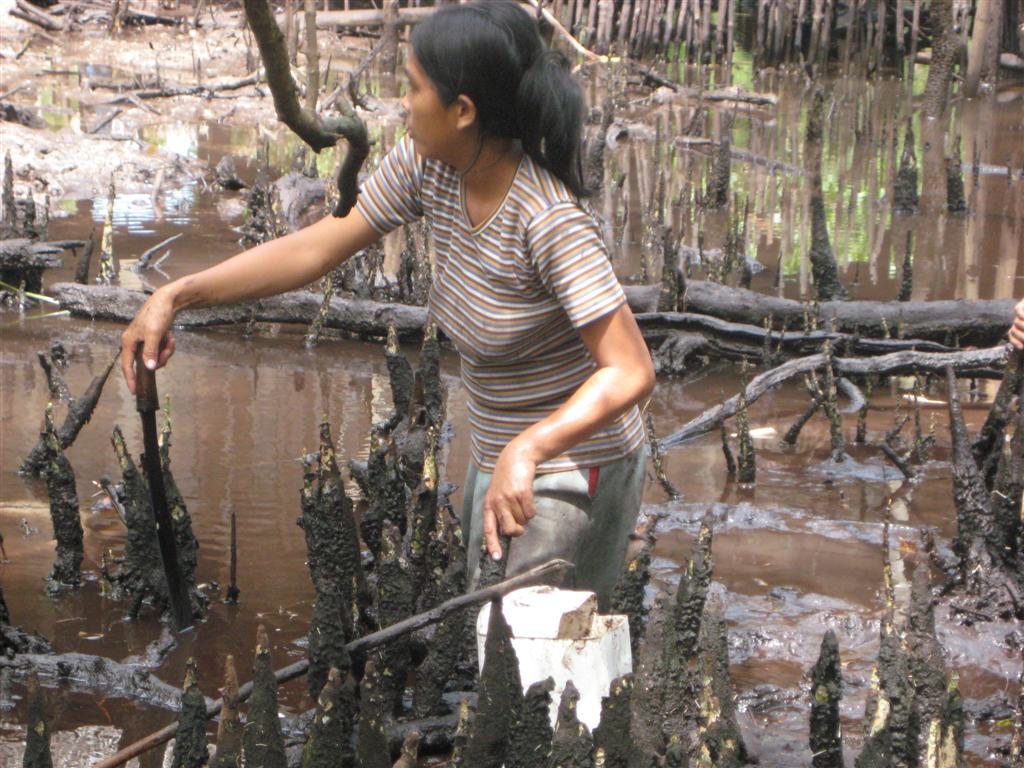 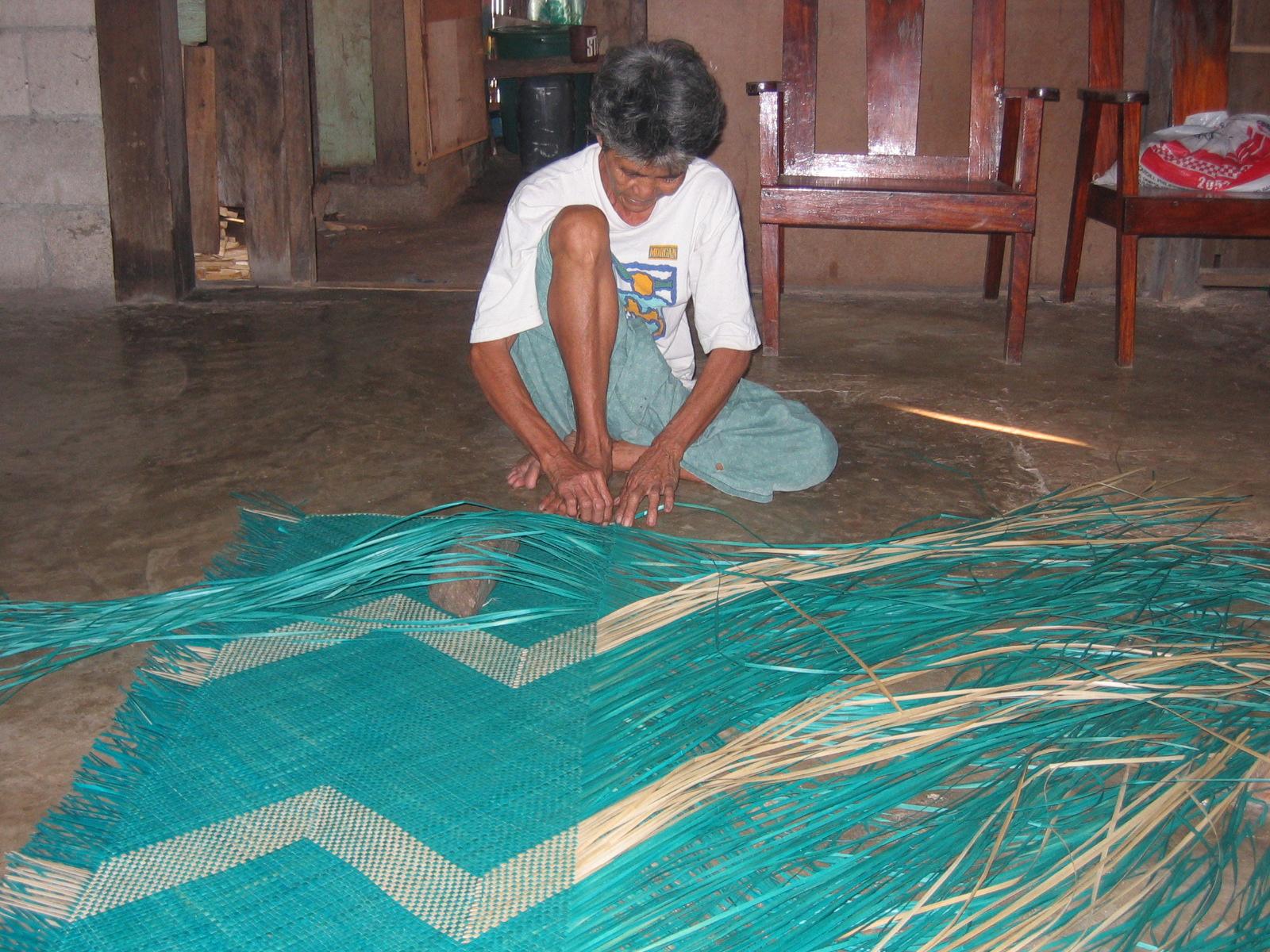 II. Current and Potential Impact of Climate Change on Women and Their Livelihoods

Climate change is expected to have a number of impacts, particularly on coastal systems. The Intergovernmental Panel on Climate Change (IPCC) Fourth Assessment Report states that coasts are projected to be exposed to increasing risks, including coastal erosion, due to climate change and sea level rise. The effect will be exacerbated by increasing human-induced pressures in the coastal areas {WGII 6.3, 6.4, SPM}. Also, on particular impact for Asian region, coastal areas especially heavy populated megadelta regions in South, East, and Southeast Asia will be at greatest risk due to increased flooding from the sea, and in some megadeltas, flooding from the rivers (WGII 10.4, SPM)

The coastal communities are already experiencing the effects of extreme changes in climate and weather conditions. They had experienced too much rainfall and stronger typhoons causing floods. The stronger winds brought about by stronger typhoons exposed the coastal communities to stronger wave actions, making it more difficult for them to go fishing or travel from the islands to the mainland. 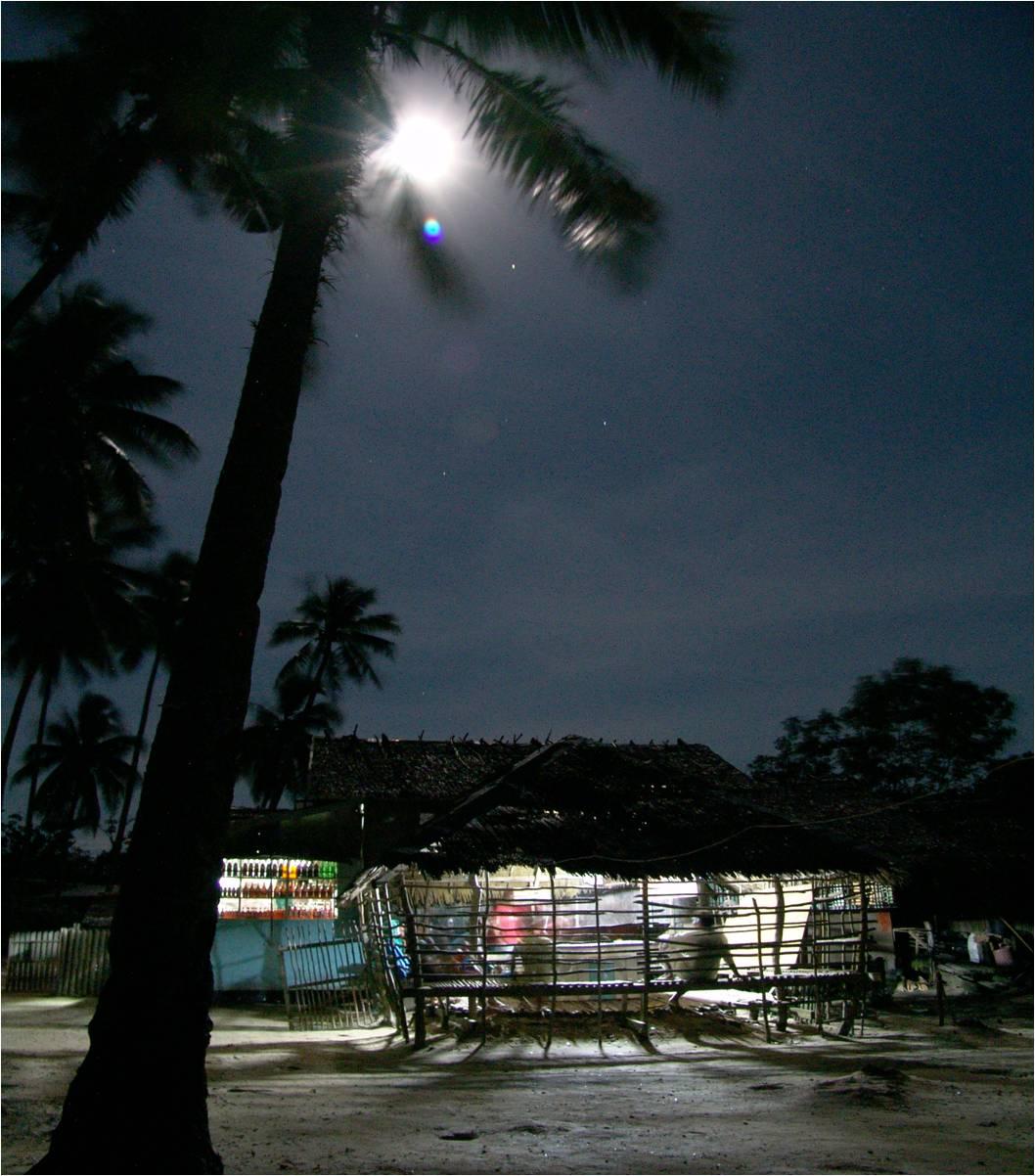 The small islands are particularly vulnerable to sea level rise as it can cause substantial loss of lands. With the coastal communities living in foreshore areas, loss of settlement is a real threat. The loss of settlement puts more burden on the women, who are in-charge of household maintenance.

By its location in the tropics, the Philippines is found to be naturally vulnerable to environmental disasters. This situation plus other human and developmental factors such as climate change compound communities' incapacity to cope with such disasters.

Effect of these changes to the coastal communities particularly to women

The IPCC report also states that sea level rise as well as human development are contributing to losses of coastal wetlands and mangroves and increasing damage from coastal flooding in many areas. With the mangroves, wetlands as well as seagrass areas primarily used by women, climate change with corresponding temperature increase, sea level rise and increased flooding lead to their economic dislocation.

Temperature increase as well as frequent flooding brings health problems and put more burden on the women who are in charge of caregiving in the family.

III. Current Initiatives by Women To Prepare Themselves for Climate Change

CERD is a non-government organization that is operating for 31 years now. It envisions empowered, self-reliant coastal communities sustainably living in harmony with abundant and diverse coastal and marine environment, and as such would like to contribute to saving and restoring coastal environment through capability building of local institutions of CB-FIRM; creation of model communities and learning areas; and building partnerships.

CERD’s work with the fisherfolk communities started with researches on fisherfolk problems, consciousness raising activities and providing trainings. A research in 1984 showed that women played major roles in pre- and post- harvest phases of fishing, with some even participating in actual harvesting. This alerted CERD for the need to organize both men and women in order to develop the fisheries sector. 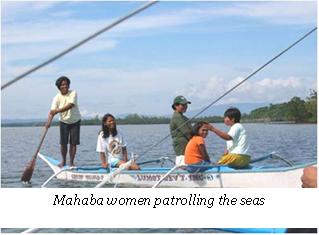 One of CERD’s program areas is Hinatuan. Located in Surigao del Sur province in the northeast part of Mindanao, the municipality of Hinatuan is home to more than 40,000 people living in 24 barangays (villages). Half of these live along the coast.

Fish Sanctuary Establishment: For Sustainable Fish Stock within Their Reach 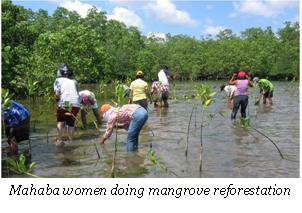 One of the seven fish sanctuaries in Hinatuan Bay is special in the sense that it was the only one initiated by women. The Ladies in Unity with Men Onward to Development (LUMOT-Dev) was formed through CERD in 1996 and registered with the Securities and Exchange Commission (SEC) in 1998. Initially CERD’s plan was to form organizations in barangay proper only, but the women in the island of Sito Mahaba were determined to have their own separate organization in the sitio, since it is difficult for them to frequently travel to the mainland to participate in organizational activities. Hence the Ladies United Movement Onward to Development was formed.

The men eventually gained interest in the activities of the women; they participated and joined the organization so the name was changed to its present form.

The fisherfolk women organizations like LUMOT-Dev had also implemented mangrove reforestation that can help address coastal erosion and protect their settlements. A total of 136 hectares mangrove areas were reforested and 946 hectares covered by Community-Based Forest Management Agreement (CBFMA).

The mangroves protected by the women in Hinatuan Bay provide several important functions. For one, mangroves protect coastlines and coastal communities from waves, tidal currents and typhoons. This is particularly important in the light of rising sea levels. The crown and stems collectively serve as wind breaks, and the specialized roots trap and hold sediments and siltation from the uplands, thus promoting water quality and growth of corals and seagrasses.

Mangroves also provide nursery and habitat to fry stages of varied fish species, as well as many different species of shell fish. The management of the mangroves ensured continuous gleaning activities of women; which serves as additional source of food for the households.

Several community services are also managed by LUMOT-Dev that helps decrease their vulnerabilities. Among these are electricity from generator and potable water projects. There is also a patrol boat that brings children to school, subsidized by the organization especially during lean months. The beta house shows movies every night and income from this project is used by the organization as funds for fisheries management.

Coastal communities are too dependent on fishing which is very risky especially in the light of hazards posed by climate change. There is need to increase their capacities to identify and come up with disaster-resilient livelihoods.

Food insecurity, unsecured settlements as well as health problems brought about by climate change increases the already multiple burden of women. There is a need to come up with specific measures to address these problems to lessen the impact of climate change on women.

Women have special needs and therefore, women and gender concerns must be considered in mitigating effects of climate change. It is important that their role and participation in mitigation measures be recognized. The women in Mahaba Island, for instance, have proven that they too have the capacity to engage in activities normally perceived as men’s domain.

Government framework for disasters is focused on emergency response. In fact, the calamity fund allocation is usually released only after the declaration of their area as in the “state of calamity”. There is a need for government to be more pro-active in preparing for climate change and disasters.

“Mangroves and Their Importance to Food Security” by Dick M. Melana, Ph.D., http://www.oneocean.org/overseas/200007/mangroves_and_their_importance_to_food_security.html