Field methods used in the baseline assessments included (1) manta tow survey technique to get the general idea of the various benthic types and amount of habitat, (2) digital photo survey to get percentage cover of the different benthic lifeform categories and (3) fish visual census technique to determine fish composition, density and biomass.

Reef health had been assessed using a 4-point index established by Gomez and Alcala (1979) and Gomez et al. (1981) wherein the proportion of living hard corals were compared relative to other benthic components. Based on this scale, the reefs of Marihatag can be classified as being in relatively fair to good condition with an average of 34% live coral cover. This is comparable to the current state of Philippine reefs with average hard coral cover for the whole Philippines at 32.3%. Across the 6 sites surveyed, Barangay Arorogan had the highest hard coral cover (42.9%). This was followed by Sta. Cruz, Antipolo, Alegria, San Antonio and Amontay. The result coincided with manta tow data showing fair to good hard coral cover. These areas are recommended as the priority sites for MPA establishment.

A total of 118 reef fish species belonging to 29 families/subfamilies were recorded within 6 sites. The average fish abundance was low, ranging from 154 to 246 individuals/500m2 (average=186). Among six sites surveyed, highest abundance was observed in Antipolo, followed by Arorogan, Sta. Cruz, Amontay, San Antonio and Alegria. In terms of fish biomass, the values ranged from 5.9 to 17.4 mt.km-2 (average=9.4). Highest biomass was observed in Umangon MPA in Arorogan. This was followed by Antipolo, Amontay, Alegria and Sta. Cruz respectively. Based on the benchmark figures established in the country, the following account describe the initial reef fish profile in Marihatag based from the different sites surveyed in the Philippines: (1) species diversity of Amontay, Alegria, San Antonio and Sta. Cruz fall under low category, while Umangon MPA in Arorogan fall under medium category. Fish abundance of all sites surveyed fall within poor category, while estimated fish biomass fall between low to high categories.

Among the six (6) sites surveyed, five were identified as having high potential for MPA establishment based on the set of criteria used. The sites include Alegria, (Rank 1), Antipolo (rank 2), San Antonio (rank 2), Sta. Cruz (Rank 3) and Amontay (Rank 4). Environmental problems such as anthropogenic stress include over-fishing and siltation are the major threats on the coral reefs of Marihatag.

An integrated approach in coastal resource management (CRM) is recommended to complement the MPA initiatives, and specific management plans for the MPAs are urgently needed to ensure enhanced MPA management and networking. 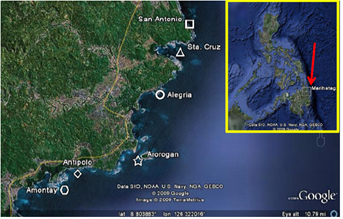 Figure 1: Dive sites where detailed reef assessments were conducted during the Marihatag benchmarking.

There is no appropriate size in setting of MPAs however; the National Integrated Protected Areas System (NIPAS) priority areas were also established with the implicit assumption of attempting to protect area representative of various biogeographic zone or habitat types (Aliño and Uychiaoco, 1997). Since other habitats (e.g. mangroves, seagrasses) were absent in most of the survey sites except in Amontay and Sta. Cruz, we are suggesting that an area of at least 25 hectares and above should be established as MPA. This excludes the buffer zone of 5 hectares extended from the core zone. However, larger MPA of greater than 30 hectares has an advantage.

Among the six (6) sites surveyed, five were identified as potential for MPAs establishment based on the set criteria since Umangon Island was established MPA. The sites include Alegria, (Rank 1), Antipolo (rank 2), San Antonio (rank 2), Sta. Cruz (Rank 3) and Amontay (Rank 4) (Table 6). Each barangay could have an MPA with size and location based on the agreed during consultation. The best location of the proposed MPAs is situated in front of the village where the initial survey was made. The total sizes of the proposed MPA are not all coral reefs. If other habitats like seagrass and mangroves (e.g., Amontay and Sta. Cruz) are present the proportion could be 30% coral reefs, 20% seagrass bed, 30% mangrove and 20% sandy bottom towards the reef crest. However, if mentioned habitats are absent, the proportion of reefs and sandy bottom towards the deeper areas could be 50% each habitat. Because each fish species has specific habitat to live while other spend their juvenile stages in one habitat and spent their adult stages in another habitat. For example most siganids and other labids spend their juvenile stage in seagrass while spending their adult stage on coral reefs. Other groups like serranids (groupers) and lutjanids (snappers) spend juvenile stage in mangroves and coral reefs on their adult stages. MPA is only portion of the reef that set aside for fish species to grow and reproduced their individuals. Larger fish (>35 cm) produced eggs about ten times more than small (<15cm).

Other option is sharing of MPA and management between two neighbouring barangays such as Amontay and Antipolo, Arorogan and Poblacion, Alegria and Sta. Cruz or Sta. Cruz and San Antonio. But this time, larger MPAs (>40has) should be established. The networks of MPAs in Marihatag could be series many small (<25has) MPAs or series of larger but few MPAs. The decision should be based on the series of consultation meetings between the communities and the LGUs through the facilitation of CERD.

After the MPA had been established, there should be monitoring, evaluation and response feedback system (MERFs) established. Since MERFs is essential in management to be sensitive, pro-active and responsive to the changes during implementation. Monitoring on the other hands is a continuous observation of any chosen parameter in the same area at regular intervals over time. Ideally, monitoring should be done inside the MPA or the no-take zone, as well as in adjacent areas of the MPA. It is necessary because this aims to evaluate the present ecological and socio-economic conditions of the coral reefs in Marihatag MPAs in particular. This is also evaluating the performance or management effectiveness of the management body or group who will be managing the MPA. Benchmarking is also important activities because it serves as baseline information before or immediately after the MPA is being implemented and to which data will be compared to the succeeding surveys.

Marihatag currently has one established MPA located in Umangon Island, Arorogan. The whole island was declared as MPA on 2002 with some level of management effort. This MPA is being managed and enforced through municipal ordinance passed on 2000 and amended on 2002. The MPA has also MPA management plan. This MPA was established due to the effort of Local Government Unit (LGU). Because of the continuous practice of illegal fishing and decreased of fish catch, they realized to set aside an area that is fully protected from any fishing activities.

Despite of these positive practices, the MPA could benefit more if the people in the barangay are involved in the management. There should be management plan that formulated and implemented. Some of the important provision of the plan should include identifying and delegating the core group who will responsible for the management of the MPA as well as setting up and carrying out a monitoring program. A guarding system could also be proposed. The plan could also help in lobbying the funds or regular budget allocation for the MPA, not only for the barangay level but also from the municipal LGU. Lastly the BFARMC should also be strengthening because they can be the focal group for MPA in their respective barangays.

In addition, there should be training workshop for the MPA management bodies (i.e., monitoring and evaluation committee) using the community-based monitoring and evaluation techniques (Uychiaoco et al., 2001). In this training workshop, they will be provided hands-on experience in various tools and strategies including the data processing, analysis and reporting which they can be used in the monitoring and management as well. Likewise, the workshop will also capacitate the existing support groups such as the Peoples Organization and coastal resource management committee in each barangay and the CERD which will be providing technical assistance in the conduct of monitoring and evaluation (M&E) in the biophysical aspect. The involvement of the CERD in the MPA implementation is critical in hastening collaboration and coordination among MPAs, which provide a venue for networking and lesson learn of the respective MPA managers. Although capacitating local communities in M&E of the biophysical is important, there is paucity of skilled manpower from the technical support group. Since several academic institutions (e.g., MSU-Naawan, Surigao del Sur State Polytechnic College) and NGO (e.g., CERD) do a research in Marihatag municipality. During their survey research, monitoring committee should be participated and working together with scientists to strengthen their capacity. The training will help monitoring and evaluation and for sustainable monitoring. This is so called the participatory coastal resource assessment (PCRA) will try to address this gap by seizing opportunities wherein the skills of local technical groups (i.e. POs, LGU) can be further enhanced in conjunction with meeting the focal project targets such as in the strengthening of MPA management.

For the proposed MPAs, people in the barangay should involve during the process of MPA establishment and during the implementation. Social preparedness (i.e., community acceptability, participation, feasibility and sustainability) is essential aspect of MPA establishment. This is to ensure the success of MPA and for sustainable monitoring. This is also to facilitate common understanding and cooperation among MPA management bodies towards the establishment of an MPA network system as part of the strengthening and sustainable mechanisms for good environmental management.

One of the major threats to the Marihatag coral reefs is the siltation from deforestation since there are two major rivers (i.e., Amontay and Poblacion) that flow into the coral reefs. The reefs become turbid during heavy rains. This pressure reemphasizes the need for an integrated resource management initiative because habitats are interconnected, and problems upstream can cause damage downstream. An integrated approach in coastal resource management (CRM) will be recommended to complement the MPA initiatives, and specific management plans for the MPAs are urgently needed to ensure improved MPA management and networking. Encroachment into the MPA is still the problem especially since the MPA had buildup of fish abundance and biomass. Local fishers were tempted to go into fishing because the neighboring reefs were already overfished.