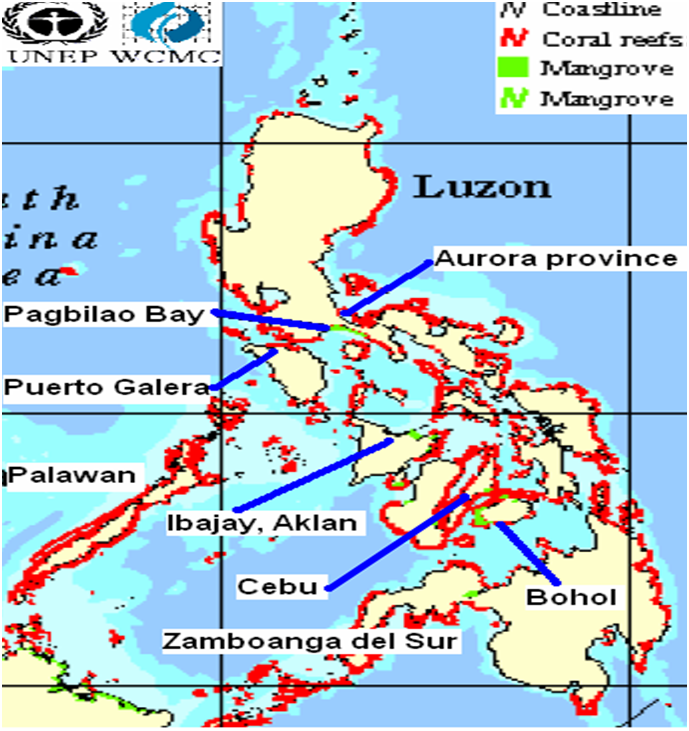 In 1995, the Philippine government passed Executive Order No. 263 of 1995, “Adopting Community-based Forest Management as the National Strategy to Ensure the Sustainable Development of the Country’s Forestlands Resources” and to promote local forest management in the Philippines. In the preamble of the E.O, it is likewise expressed, “the indispensable role of local communities in forest protection, rehabilitation, management, and utilization… ” and further states that

“entrusting the responsibility for forest rehabilitation, protection and conservation to the community of stakeholders and affording them equitable access to the forest and coastal resources are viable forestland management strategies as born by the experience of the DENR

Many organized groups or what is locally known as people’s organizations maximized this policy and program direction to engage in the management of the forests including mangroves. A number of mangrove areas have been declared as eligible for the awarding of the Community-Based Forest Management Agreement (CBFMA) wherein organized groups can apply for a 25 year stewardship contract.

The Center for Empowerment & Resource Development conducted its Rapid Rural Systems Appraisal (RRSA)in the municipality of Hinatuan in 1996. All the 6 project sites identified to implement the Fishery Integrated for Resource Management for Economic Development (FIRMED) Program have large mangrove areas. Large patches have been converted to fishponds while some areas were cleared but are left idle. Cutting of trees are rampant and used for different uses such as timber or construction materials and fuel wood that contributed to further deterioration of the mangroves in Hinatuan.

To generate support from municipal fishers in the project sites, CERD conducted series of community consultations using the result of the rapid rural appraisal. Likewise, a participatory rural appraisal (PRA) was also conducted to have comprehensive information about the state of the coastal and marine resources in the bay and to understand the community’s situation, issues and potential for development efforts.

The result of the RRSA and PRA were validated and used in identifying positive actions to address different coastal and marine resource depletion and destruction issues. Initially, core group or adhoc per project site were organized. The core group of men and women fishers assisted in identifying other fishers that could join in the identified resource protection and management efforts. As activities were implemented, these fishers group were formally established to ensure that the plan of actions will be implemented continuously. In 1998, an all men or all women as well as mixed men and women fishers’ organizations were formed in Barangays Talisay, Loyola, San Juan, Portlamon, Cambatong and Mahaba Island, a sitio of Barangay San Juan in 1998. As of 2010, there are 14 fishers’ organizations in Hinatuan and these village or barangay based organizations are federated at the municipal level.

To mobilize participation in the establishement and management of idebtifed resource management tools such as fish sanctuary or no take zone and/or mangrove planting, protection and management, seminars on fisheries situation and issues, both local and national; fisheries policies; basic marine ecology including topics on the importance of corals reefs, seagrass beds and mangrove forest and their relationships; causes of fisheries resource depletion and habitat destruction; and different resource management tools were conducted to the men and women fishers’ organization. Women’s role and contribution to the fisheries sector were emphasized during the discussion of fisheries situation. It is important that both men and women fishers recognized that the later are one of the key stakeholders in fisheries development and management.

Training courses on leadership, facilitation, negotiation, partnership building and organizational development and management skills conducted and attended by both men and women fishers.

As early as 1998, mangrove planting and protection efforts have been done in Mahaba Island by the LUMOT Dev’t or Ladies United Movement Onwards to Development, an all women fishers’ organization during that time.[5] Aside from planting mangrove, the women of LUMOT Dev’t also established a 19 ha fish sanctuary. Planning was done to implement the mangrove rehabilitation which started by planting Rhizophora propagules which was not very successful due to inappropriate site and limited knowledge on mangroves. In 2003, they identified the appropriate site for planting with the assistance of the technical staff of CERD. Seedlings of rhizophora again were collected and directly planted. Guard houses were built to ensure that illegal activities are immediately acted upon. Monitoring of reforested areas is done regularly by trained local resource monitoring team led by CERD Marine Biologist. Data on survival, growth rates and height are gathered and used for future actions. Maintenance activities such as removal of barnacles, replacement of dead seedlings, clean-up were also done on a regular basis.

As of 2003, around 136 hectares of mangrove areas were reforested in at least 3 project sites. Two (2) CBFMA were also awarded to the fishers’ organization in San Juan and Talisay covering 946 ha. As of 2011, a total of 1132 hectares are managed by organized fishers. Each fisher organization has a separate mangrove committee. Members range from 5 to seven per committee. In San Juan and Mabaha, all the committee members are women (7 and 5 respectively). In Talisay, 4 women and 3 men composed the committee and in Loyola, there are 3 women and 2 men committee members.

Active participation of women’s fishers in mangrove protection and management as well as in other CRM efforts was made possible because CERD, as the external agent, has not only worked with men fishers but also with women. Information from the communities is gender disaggregated such as resource use and issues by women and by men, seasonality of fishing and gleaning activities, gender division of labor, men and women’s roles in the fisheries activities and other related data.

Women’s orientation, gender sensitivity training courses, women and leadership are among the various courses attended by the organized women. These courses are aimed at raising the awareness of women about their skills, potentials and aspirations as well as building their capabilities as equal partners and leaders in development. Purposively, CERD would separate women from men organizing to give space for women to develop their self confidence. They can merge with the men if they decide to. In mixed fishers’ organizations, it is encourage that at least 30% of the members and leaders are women. However, the number of women vis s vis the men is just one variable to engage and empower women fishers. What is important is they have the skills and the confidence to decide and engage openly with others.

In 2010, CERD has also started conducting Gender Sensitivity for Men or GSM. This course facilitated by a male trainer helps men understand themselves and their relationship with the women. Men have to understand, accept and recognize that women, their wives, female daughter/s are their partners and not their servants.

Another factor that facilitated the participation of women fishers is the presence of the legal mandate or law that recognizes women as fishers. In the Philippine Fisheries Code of 1998 or RA 8550, the definition of fisherfolk included women as fishers. Then in 2009, the Magna Carta of Women or Republic Act 9710, highlighted increased women’s representation to development councils to 40% which means that women fishers in the Fisheries & Aquatic Resource Management Council (FARMC) would be increased (only 1 woman or youth representation in the Municipal level FARMC is stated in RA 8550). Furthermore, the Magna Carta defined fisherfolk as “ includes Women engaged in fishing, subsistence producers, shell gathering, commercial fishing and aquaculture. Several national laws support women’s empowerment and development and have been used to mobilize women from the different marginal sectors.

In the years that CERD has worked with communities on mangrove reforestation and management, the usual species planted was Rhizophora since this was also being promoted by the government. In some areas, the appropriate species have not been planted due to this practice and thus the reforestation effort was not successful. The recorded survival rate based on monitoring activities was 50 to 70%. In 2008-2009, CERD started the nursery for different species and this is managed by members of organized fishers so that other species could be reintroduced and the practice of planting a single species will be minimized.

CERD is also engage in the policy advocacy, through the NGOs for Fisheries Reform (NFR),that will eventually provide clear guidelines on the reversion of abandoned, underdeveloped and underutilized fishponds into mangroves. Piloting of the implementation of the guidelines will be done if there are AUU fishponds in CERD assisted areas. However, the appropriate approach to restore mangrove areas is very much needed.

At the local level, a training course on mangrove protection and management including appropriate monitoring methods and tools will be conducted to improve knowledge and skill of communities and to better manage mangrove areas. 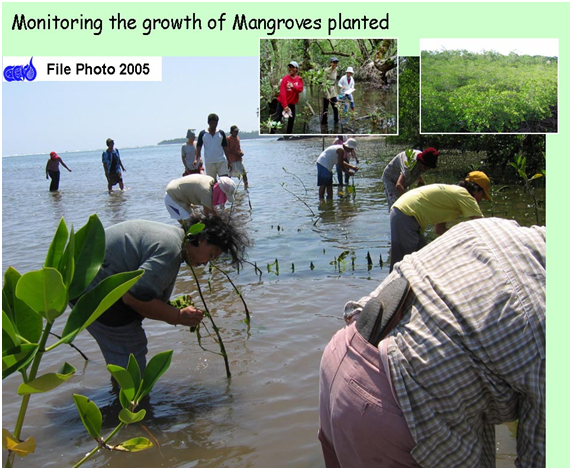 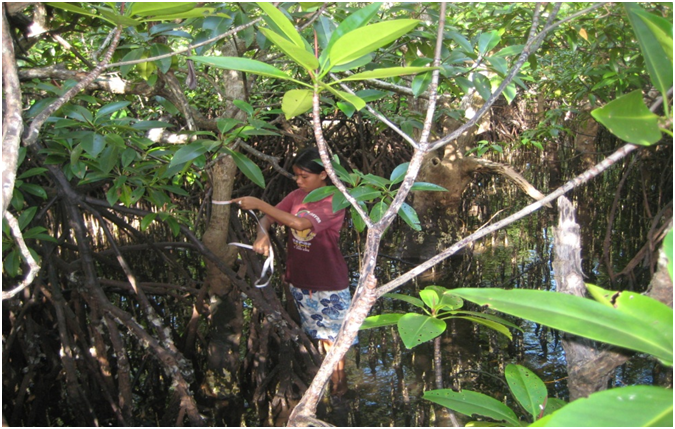 [1] Hinatuan Bay is located in the province of Surigao del Sur, Mindanao and is one of CERD’s project sites where Community Based Resource Management Program is being implemented.