It is a common perception that fishing is a major source of income for coastal dwellers. The 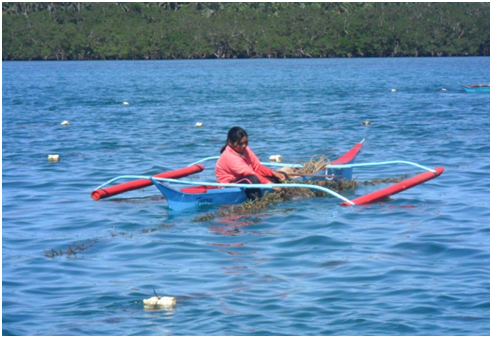 Philippines being an archipelago is characterized by numerous coastal areas which unfortunately are inhabited by one of the country's poorest sector, the fisheries' sector. Stories of poverty-stricken families who have to live on what the sea can offer are often told and retold to picture a depressing situation for this sector. One of the main problems identified in coastal areas is low income since most of the fishers depend on the sea for their living. Fishing is not the only source of living in a coastal community. There are many alternative livelihoods which will somehow respond to the economic problems of the small fisherfolks in the coastal communities but they have limited knowledge, skills and financial resources in the utilization of the resources present in the community.

One household which showed that there is a big potential for change from solely depending on subsistence fishing to engaging in seaweed farming is Manong Olim Fernandez’s family. Olim and Aida is a typical married couple. Olim is 60 years old and Aida is 59. They have four children, who are all males. They currently live in a small island in the municipality of Hinatuan in the province of Surigao del Sur, Mindanao Philippines. Olim grew up in Baybay, Leyte, a province in Visayas, Central Philippines. He finished his secondary education, but was not able to continue in college because of financial problem. His search for a better life brought him to Bislig in Surigaodel Sur. There he met and married Aida. The only source of income of the couple was fishing. At some point in his life, Olim got a job at the Philippine National Oil Company (PNOC) as a labourer (seismic surveying), but when his contract finished after five months he went back to fishing.

At first the only source of income of the couple was fishing, in 1990.Life was very difficult for them. Income from fishing was only Php 1,600.00 in one month, with the use of a paddle boat and net, not enough to cover for the basic needs of the family of four children and his wife. Early at dawn (4:00 AM), he and his eldest son went out for fishing and return home at 10:00 in the morning with their average catch of one kilo per fishing trip at 80 pesos per kilo. In one month, the average number of days in which they went on fishing is 20 days.

And he still had a lot of vices then such as cell phone load, cigarette smoking, drinking & gambling. He thought that as head of the family he has the right to such kind of indulgences and his wife would be contented with whatever income he takes home. He felt that slowly they are getting poorer. Their fishing net not mended and the fishing boat not repaired because of low income from fishing, The generated income was used for the daily consumption of the family, and their expenses at that time was not prioritized. Fish catch has been decreasing,using the paddle boat and net, from 2 kilos/day in 1990 to 1 kilo/day in 1999. Until one day a neighbor told them that fishing in a neighbouring island is better than in their place. So they decided to move to this island village (called Cabgan) which is part of Barangay Loyola, Hinatuan, Surigao der Sur. They moved in Cabgan in 1999.

The couple became members of the organization PUGAW (People Unite to Guard Aqua-Marine Wealth), organized in SitioCabgan by the Center for Empowerment and Resource Development Inc. (CERD Inc.) in 1997.Olim and Aida were the first families met by PUGAW members. At first, naturally Olim was suspicious. He did not believe a fisher’s organization can help them, he says he has gone through the same experience before. CERD helped PUGAW members in analyzing the problems of the community using Participatory Learning and Action methods. They also held BACMEA seminars (Basic Coastal and Marine Ecology Awareness). Olim attended all these, just to satisfy his curiosity. PUGAW later decided to organize a chapter in Cabgan, and they got a few members. This initial members were invited to attend seminars on fishery laws, how to manage an organization and given orientation on fish sanctuary establishment. Unlike previous programmes, there was no seed capital given right away to the small fishers. Olim got drawn into all these, and eventually become a member of PUGAW in Cabgan. They performed their responsibilities in guarding their fish sanctuary because they are convinced that it helps in improving their fish catches. They also planted mangrove, without any single centavo of support from the local or national government. From the very beginning of the project intervention, CERD inculcated to them that they should rely on their own strength.

However, the fisheries resource is slow to regenerate even with the fish sanctuary and mangrove areas reforested. So while the coastal and marine resources and regeneration and improving, what can CERD introduced to the fishers as additional income. It was then in 2002 that CERD introduced seaweed farming in Hinatuan. At first he was not interested in seaweed farming because he thought it is very laborious. CERD did not impose seaweed farming to the fishers, but patiently discussed the benefits they (fishers) can get from it. It took them more than a year before he finally agreed to try it out with one roll of nylon rope. He also got training in seaweed culture from CERD. However, one problem they have been facing is how to protect seaweeds from being infested with a disease called “ice-ice”. Ice- ice happened when there is low salinity and change in water temperature and light intensity that cause stress to the seaweeds. When the plant is under stress, it emits a moist organic substance that favors the presence of opportunistic bacteria in the water causing the “whitening” and hardening of the seaweed branches. The whitened part of the seaweed looks like ice, thus the term “ice-ice”. Innovations done by the seaweed farmer is to adjust the depth of their planted seaweeds in order for the seedlings not to be affected by the disease, transfer of site for seaweeds farming where incidence of ice-ice was not yet observed, and regular monitoring of the physico- chemical parameters (salinity, turbidity, temperature & current), in the area to monitor if there is a change in the parameters which will affect the seaweeds.

In 2009, CERD also conducted household organizing and the Fernandez family was of the household who participated. In the PO level there is orientation in HhDI and what really encourage them to join is the sharing from the PO members who undergone the process and sharing also from the CDW. During discussions also they learned the difference between those household who join the HhDI compared to them. The process that the family underwent included getting the information from the family members and formulation of family agreement (Psychological preparation).  The 1st tool used was Household Balance Sheet (Revenue/ Income and Expenses). They observe that they had higher expenses including vices such as cell phone load and drinking session’s everyday, compared to income. Their income was not managed properly since their expenses were not yet prioritized. The family recommended to reducetheir expenses on the wants of the family. Manong Olim committed to minimize, going out with friends and drinking session. Rent for dryer will also be collected and recorded by his wife for its maintenance, 1 peso per kilo and they had targeted for savings 500.00 per month.2nd tool was Gender Analysis Tool (Household Management), where the productive and reproductive role of each of the family members was listed. 3rd tool Human Resource Inventory, getting to know each of the family members in terms of their formal and informal education, health condition, talents and skills of each member. 4th tool was SWOT, strength, weaknesses, opportunities and threats was analyzed within the family.

5th tool Household VMG. The household vision were, their children will be able to graduate in college, mobilize savings (5,000.00) which will be allotted for the education of his children, additional capital for sari-sari store, build a new and comfortable house in the town proper in Lacasa, expansion of their seaweeds farms.

As a result of HhDI, Olim’s vices were minimized, from cell phone load, cigarette smoking, drinking & gambling to prioritized expenses only.  Cell phone load before, he directly calls, now he prefer to text than call, 2 packs of cigarette was consumed before, in the present only one pack, his drinking sessions was also minimized, he now prefer to drink in their house moderately than went out & drinks with friend.

Their children participated in the household chores, each of the family members had their task to do, early in the morning Manong Olim and his four children went to the seaweeds farm. At 9:00 AM they went home to eat breakfast with his wife preparing food for them. After breakfast it was his children who do household chores, while some of the members were tying the new seedlings to be planted in the afternoon. His wife also helped during the drying of the harvested seaweeds as well as in the economic activities such as fishing and seaweed farming. The family learned to prioritize spending for basic needs such as food, clothing, education and maintenance and house repair, medicine and maintenance for pumpboat and seaweed dryer. One of the effects of savings mobilization was his eldest son was able to finish his college degree, they were able also to purchase rain collector & repaired their house. His family was able to saved 60,000.00 per year. The course of his life lowly changed since he joined the organization in 2000, and especially when he started seaweed farming in 2004. The family’s engagement in the household development process improved what Olim and Aida learned from PUGAW because the couples are not the only ones involved in improving the family, Their children have also been engaged in the process of transforming their lives. 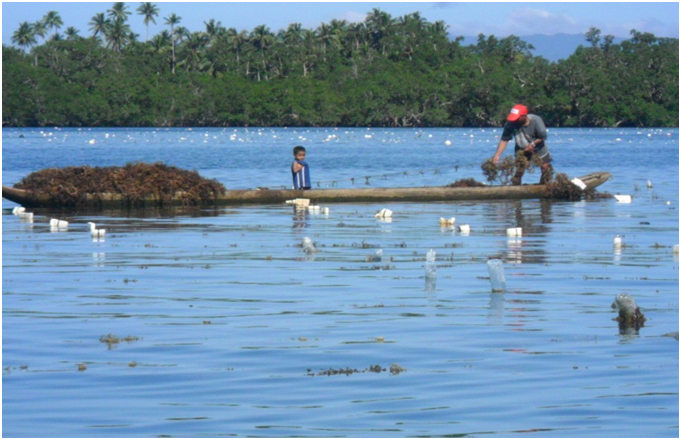 As of 2005, Olim decided to focus on seaweed farming, and fishing is only his part time job. His catch is only for family consumption. He was able to send his children to school. Now, they were able to repair their house, and build a new house in town proper, with only 1 single paddle boat to two motorboats. They also invested in other additional sources of income such as sari-sari store, small poultry raising and hanging vegetable garden (connected to their seaweed dryer. Olim is now managing 60 lines of seaweeds from the 1 single roll of nylon rope he started years ago and with an income of 16,000-40,000 per cropping depending on the weather condition, in which he and his family is trying to sustain.