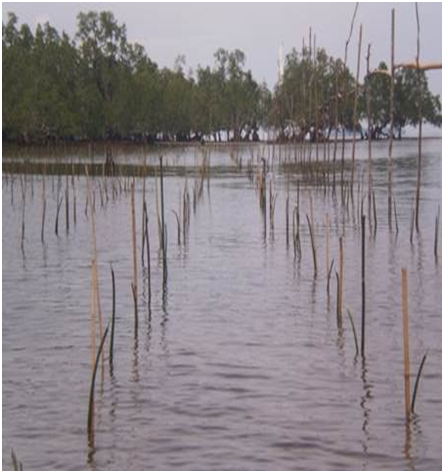 Barangay Tidman is situated along the coastal area of Hinatuan, Surigao del Sur and has one island sitio. It has a total population of 3,487 with 705 total households. Fishing, coastal and upland farming are the major sources of income. Riceland, root crop and seaweeds farms are all susceptible to disaster and climate change effects.

As one of the largest barangays in the municipality of Hinatuan, it is like any other barangays which is vulnerable to different types of coastal hazards such as typhoons, earthquake, floods, tsunami and storm surges. Typhoons and floods are perceived as the most disastrous as experienced by the community residents, which was evident during the Typhoons “Sendong” and “Pablo” that hit the province. It created a traumatic experience to all of the Tidmananons especially to the seaweed growers. Traumatic, because their seaweeds were directly infested by ice-ice disease resulted to failure and low income. Another problem perceived is the continuous rising of temperature. This has a stressful effect to the upland farmers and fishers since they are exposed to sunlight when doing their livelihood brought about by global warming.

Tidman Fishermen Association (acronym TIDFA) is a DOLE registered fisherfolk association. This was organized by the LGU of Hinatuan through the Municipal Agriculture Office in 2008 with 80 pioneering members. Seaweed farming was the first livelihood project they obtained from the SUMACORE project thru the LGU and BFAR-13. Unfortunately the number of members gradually decreased every year since members were discouraged because of project mismanagement. In fact it dropped down to 9 members which became in-active and nonfunctional. Last 2012,CERD expanded to Barangay Tidman to help the coastal communities by re-organizing. TIDFA was the target fisherfolks organization to partner with and help in addressing poverty among marginal fisherfolks. CERD conducted organizational diagnosis and undergone the process of reorganizing. CERD did a total overhaul of TIDFA.

Members of the association were screened and oriented prior to becoming a full-fledged member. Voluntarism is one of the values that the education committee is inculcating to the aspirant members for them to take on whatever related activities that the organization has planned. There were several undertakings that the organization did without any compensation, such as the construction of seaweed drier, coastal clean-up, construction of Mangrove Nursery, roving and apprehensions of illegal fishing activities and cutting of mangroves, maintenance and protection of mangrove reforested areas, facilitating Household Development Intervention, resource monitoring, and others.

The association is implementing mangrove reforestation since the start of the National Greening Program in Hinatuan through the partnership with PTFCF and DENR-CARAGA in coordination with Center for Empowerment and Resource Development (CERD)-Hinatuan. Two hundred sixty one (261) hectares of mangrove area were reforested but unfortunately damaged by Typhoon Bopha or Pablo when Hinatuan was hit last December 4, 2012. Nevertheless, the association did not stop their initiatives on coastal resource management and rehabilitated the damaged planted mangroves but only few where replaced. With the support of Department of Environment  and Natural Resources (DENR), the rehabilitation efforts was expanded through the Cash for Work program wherein there were 159 hectares replanted. 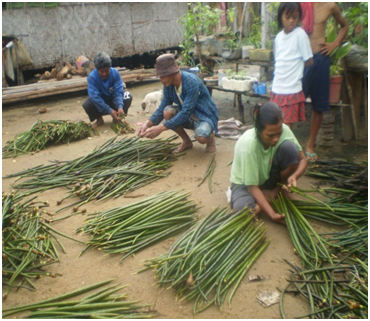 The mangrove reforestation activities started through gathering mangrove propagules. Before the collection was done, CERD in partnership with Department of Environment and Natural Resources (DENR) oriented the TIDFA committee on how to select the mature mangrove seeds and on proper handling and transporting of the gathered propagules. Sorting was done based on species, maturity and quality.

Mangrove planting was done first by sticking with a distance of 2m x 2.5m in an enhancement planting area and 1m x 1m in an open area. Sticking is important to uphold and protect the propagules from waves and currents. Then tying of propagules to the placed stick was followed to prevent it from trembling.

The association conducted regular maintenance to the planted seedlings by removing attached foreign particles and sargasum or “samo”. Protection was done also by regular roving and apprehension to mangrove areas, not only seedlings are protected but the whole mangrove area in Tidman as well. The PO also prohibited the shell gleaners to gather shells within reforested areas because root system will be affected. 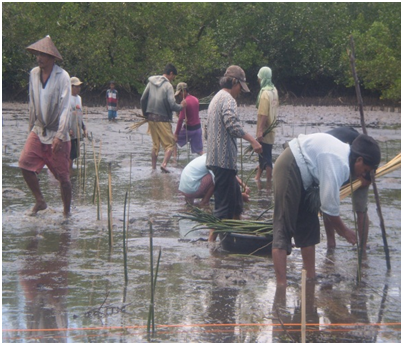 members were trained by CERD in monitoring mangroves with the support of OXFAM-BINDS Project. In terms of mortality and survivability of the seedlings, the survivability is high with 92.37% and with mortality rate of 7.63%. Mortality of the mangroves seedlings was attributed to both human and natural threats. Incidence of fishing with push net & beach seine in the planted area disturbed its growth. For the natural threats these include typhoon, flooding & epiphytes (samo, Sargassum) affecting the seedlings. Climate change that caused intense heavy rain that caused flood affected the water quality and temperature which is sometimes not tolerable for the mangrove seedlings.

Mangrove cutting in Barangay Tidman was rampant before the existence of the TIDFA in the barangay. This unlawful practice gradually changed because of the active involvement of the Tidman Fishermen Association in the community. The association underwent several awareness raising sessions on coastal resource management and Disaster Risk Reduction and Climate Change Adaptation (DRR-CCA) initiated by Center for Empowerment and Resource Development (CERD) in partnership with the Local Government Unit (LGU). With this, the capacity of the TIDFA was enhanced and strengthened. Now the people of Tidman including the fishers realized the importance of mangroves in the community not only for sustainable resources but also as mitigation to climate change effects. 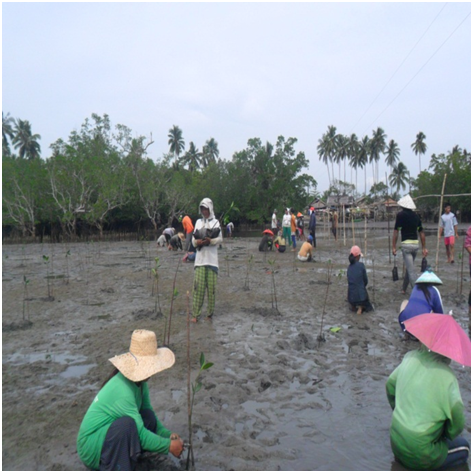 There are other challenges that the organized fishers may face such as the increasing number of population and high poverty incidence in the barangay which will increase the demand for mangrove materials’ use as building houses and firewood. Limited resources to use for roving and apprehensions such as patrol boats, binoculars, megaphones, and life insurances may reduce the regular roving and apprehension activities due to budget and logistics constraints. Rehabilitation of the remaining damaged mangrove areas may be difficult to achieve because it needs enough funding for seedlings and mobilization.