A story of Dolphin Rescued by the fishers in Bugko, Mondragon, Northern Samar

I am Jhon-Jhon Espina, 19 years of age, a resident of Barangay Bugko, Mondragon, Northern Samar. I am the son of Mr.  & Mrs. Jose Espina who are both members of Fisherfolks organization in our barangay. One morning, I saw a lot of people along the coastline of Bugko. They are all happy because of the dolphin. They keep on playing and joining the dolphin in swimming. My mother was busy calling and texting the barangay officials and CERD staff asking for a help on what will we do with the dolphin.

Because of my fear and sympathy to the dolphin that it might be killed by other fishermen, I joined the group of people in the sea in handling the dolphin. From 6am we were waiting for the assistance and guidance on what to do. But I saw the eagerness of those people that they also want the dolphin to survive, unlike before when they killed a big fish, bigger than the dolphin and the meat of the fish was shared within their group. As the saying goes “People do change as time went by” and this was a sign of change.  This time they want the dolphin to be safely returned to the sea. I admit that not all of the people which surrounds us during that time were willing to help in rescuing the dolphin, other were also interested in getting the dolphin because they want to have its meat, sell it and have an immediate source of income, but there were just few of them, the crowd was still surrounded by people who voluntarily helped in rescuing and releasing the dolphin back home.

Eight-thirty in the morning, CERD staff came and this also helped me to have a confidence that the dolphin will be rescued and released to sea in time. A lot of people came by, but not all of them came to help, other just wants to look and curious on what was happening and gather information that they can tell to their friends about the incidence and say they were really in that place. PNP also arrived at that time, but only to get pictures and didn’t even help.

At first, it was hard for us, some suggested that we just leave it and let it die, but based on what I saw on how it struggles to survive, I didn’t give up.

Even if the dolphin dies, and we cannot safely release and return it to the sea, I will see to it and ensure that it will be buried and no one can get it.

I was glad that I’m given a chance to save a dolphin, although we were hungry and tired since we started at 6 am until 3:30 in the afternoon, I was happy to save this creature.

I hope that it will serve as an example to other Barangays, that if ever there is a dolphin that will accidentally be trapped in the area because it is wounded, and in their respective areas, they will do the same thing in rescuing the dolphin. I’m just worried on how the dolphin will survive that it was wounded, but the best thing that we could do to ensure that it will survive was help it safely return to its home where it can regain its strength. 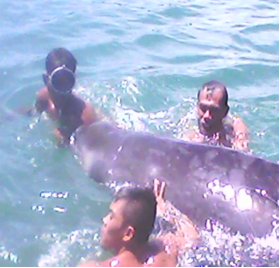 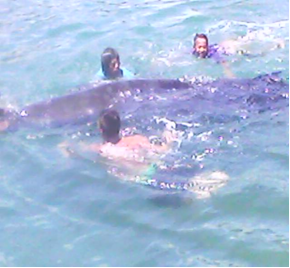